ABOUT
The Client installs and replaces windows and doors for homes and residential units. With its headquarters located in Edmonton, Alberta, the company primarily targets homeowners throughout Alberta, Saskatchewan, Ontario, and other Canadian provinces.

The Client has been a Callbox customer since 2014. Callbox handles most of the activities in the Client’s outbound prospecting program.

At the time the Client started working with Callbox, the company had a fairly extensive coverage of key areas in their primary markets of Alberta, Saskatchewan, and Ontario.

The early campaigns that Callbox launched for the Client were aimed at expanding the company’s presence in newer locations throughout these provinces. Around two years into the partnership, the Client shifted their marketing focus toward expanding across Canada.

The Client was very particular with the depth of product knowledge that the agents assigned to the project held. The Client had prior experience with a different provider that focused the messaging strategy on the Client as an organization but underemphasized the company’s products and benefits.

In addition, the Client also wanted Callbox’s appointment setting solution to seamlessly integrate with the company’s processes and technology stack. In particular, the client made it clear that the outbound campaigns should sync up with their internal CRM tool. 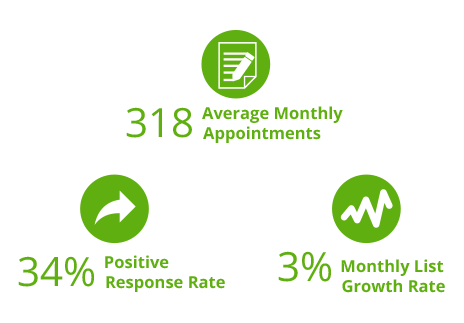 Callbox planned and carried out phone-based outbound appointment setting campaigns for the Client. The project’s main objective is to hand off qualified prospects with a very high degree of interest in the Client’s window and door installation services.

1. The company sells to homeowners within a specified income bracket and age group. This was initially limited to the company’s primary markets of Alberta, Saskatchewan, and Ontario but was later expanded into other Canadian provinces.

2. The Client provided its own prospect list, which the Callbox team supplemented with additional records and updated fields.

3. Most of the new contacts that Callbox provided have been acquired through research. These new records were reviewed and approved by the Client before being used.

1. The campaign team’s calling agents contacted prospects and determine their interest in the Client’s services with a series of probing questions. Contacts who were planning to replace their window or door, plus agreed to meet with a rep for a free estimate, were tagged as success calls.

2. To ensure that calling agents had adequate product knowledge, product training and call simulations were done prior to the project. The Client also regularly reviewed call scripts and recordings to see if their product-level value proposition was maintained in the calls.

3. Callbox tailored each outbound campaign to meet the Client’s changing requirements, scaling up the manpower and resources allocated to the project as needed. When the target locations grew to include other provinces in Canada, Callbox assigned an additional calling agent and another data specialist to the campaign team.

The campaign team has been able to maintain a positive response rate of at least 34% and a monthly list growth rate of 3%.

The appointment setting program is still ongoing and has now completed more than five years of targeted outbound B2C campaign activities for the Client.

On average, Callbox hands off 318 qualified appointments to the Client’s reps each month. The campaign team has also been able to maintain a positive response rate of at least 34% and a monthly list growth rate of 3%.

The Client is very satisfied with the results of the program so far and continues to partner with Callbox.