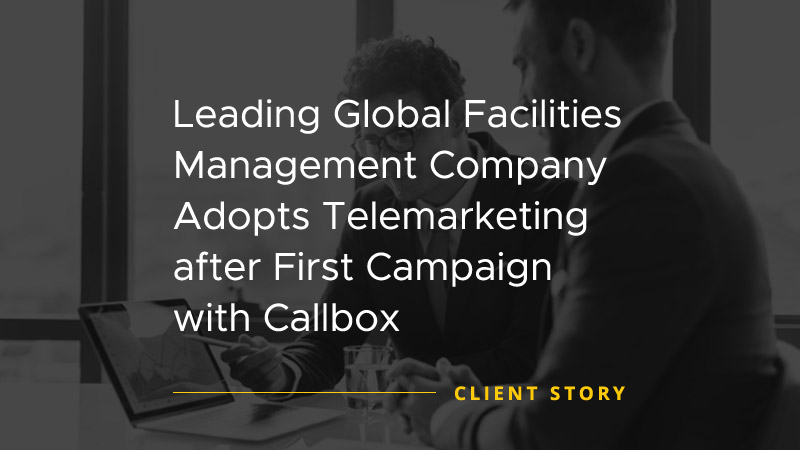 As of this year, the Client’s main company operates in six countries including the US, Canada, Australia, South Korea, India, and China, servicing over 300 million square feet of municipalities, schools, stadiums, offices, and various industrial and non-industrial facilities.

For many years, the Client had been relying on occasional email and inbound marketing efforts to generate sales opportunities. Despite its impressive portfolio of services, it often struggled to produce a sufficient number of sales leads to reach its production targets.

So, when the opportunity came up to evaluate other options for future growth, the Client knew their lead generation strategy had to change. Soon, it saw the potential in telemarketing. However, since it did not have the right toolset to implement a targeted cold calling campaign, it decided to take the outsourcing route for the first time, and ultimately chose Callbox.

The Client outlined its objectives:

As per the Client’s requirement, Callbox focused on contacts within 60 kilometers of the central business districts of Dandenong and Melbourne in Victoria, and of Elizabeth in Southern Australia. The campaign specifically targeted commercial buildings, warehouses, and industrial facilities with a total floor area of at least 30,000 square meters.

Given the scope of its target market, Callbox immediately recognized the challenge of launching a targeted telemarketing campaign. It started off with an email blast, and utilized its in-house research team to manually profile, filter, segment, and qualify prospects against the Client’s criteria. Despite the staggering amount of work it required, Callbox was able to round-up its resources and get the calling campaign running in no time.

Finding prospects proved to be a real challenge, particularly with rented facilities. In this situation, there was simply no substitute for experience, and Callbox’s 10 years of expertise in telemarketing truly played out.

Pleased with the results, the Client endorsed Callbox to its mother company in the US, and hired another salesperson to keep up with the influx of new business opportunities.

Fill up our form below and you’ll be able to read in-depth strategies and tools that contributed to the campaign’s success based on the Client’s challenges and goals.

We keep any info you share with us private and confidential. For more on how we process and protect your data, please review Callbox’s Privacy Policy

This site uses cookies. By continuing to browse the site, you are agreeing to our use of cookies.

We may request cookies to be set on your device. We use cookies to let us know when you visit our websites, how you interact with us, to enrich your user experience, and to customize your relationship with our website.

Click on the different category headings to find out more. You can also change some of your preferences. Note that blocking some types of cookies may impact your experience on our websites and the services we are able to offer.

These cookies are strictly necessary to provide you with services available through our website and to use some of its features.

Because these cookies are strictly necessary to deliver the website, refuseing them will have impact how our site functions. You always can block or delete cookies by changing your browser settings and force blocking all cookies on this website. But this will always prompt you to accept/refuse cookies when revisiting our site.

We fully respect if you want to refuse cookies but to avoid asking you again and again kindly allow us to store a cookie for that. You are free to opt out any time or opt in for other cookies to get a better experience. If you refuse cookies we will remove all set cookies in our domain.

We provide you with a list of stored cookies on your computer in our domain so you can check what we stored. Due to security reasons we are not able to show or modify cookies from other domains. You can check these in your browser security settings.

These cookies collect information that is used either in aggregate form to help us understand how our website is being used or how effective our marketing campaigns are, or to help us customize our website and application for you in order to enhance your experience.

If you do not want that we track your visit to our site you can disable tracking in your browser here:

We also use different external services like Google Webfonts, Google Maps, and external Video providers. Since these providers may collect personal data like your IP address we allow you to block them here. Please be aware that this might heavily reduce the functionality and appearance of our site. Changes will take effect once you reload the page.

The following cookies are also needed - You can choose if you want to allow them: