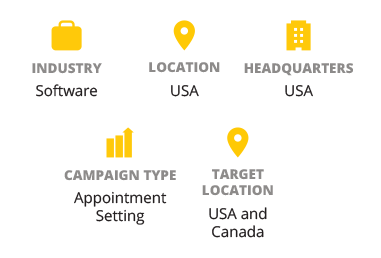 ABOUT
The Client develops and provides membership management software designed for fitness clubs and wellness centers. The company targets gym facilities of all sizes, as well as single-location and multi-site fitness chains throughout the United States and Canada.

The Client offers a very competitive fitness club management platform that handles operations, memberships, sales, and back office processes. But the market for this type of software in North America is also highly saturated, with more than 50 major vendors operating in the same segments as the Client.

The company approached Callbox to help execute the outbound portion of their marketing program. They already had a very effective digital marketing process in place, but was dragged down by chronic underperformance in their sales development efforts.

Internally, the Client generated around six sales meetings on average each month. As the number of new customers continued plateauing, the company wanted to at least double the opportunities entering their sales pipeline.

The Client understood that reaching this target would need substantial commitments in manpower and other resources. The new pipeline targets would require them to ramp up their direct outreach volumes and expand their marketing database. That was why they partnered with Callbox. 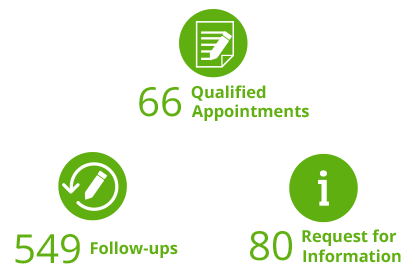 Callbox and the Client worked out a campaign plan for a three-month appointment setting program. The campaign’s primary objectives were:

To achieve the campaign objectives, Callbox carried out the following activities.

To guarantee the quality of data to be used in the campaign, the list underwent thorough customer profiling, which involved manually validating and verifying each database record and field.

1. The campaign targeted gyms and fitness clubs throughout the US and Canada, reaching out to persons in charge of gym operations, memberships, facilities, and administration.

2. The Client provided records from their in-house prospect list, which the Callbox team expanded and enriched with additional contacts.

3. The target list was further divided into six segments which represented five major wellness chains and one category for the other fitness centers.

1. The campaign used a combination of phone and email touch points to engage the target prospects.

2. Emails worked well at initiating contact, sending out sales collaterals, and following up with prospects throughout the outreach cadence.

1. The team carried out the outreach cadence with the help of Callbox’s suite of CRM and marketing automation tools found in Pipeline CRM.

2. Pipeline CRM also enabled real-time tracking and campaign management for both the Callbox team and the Client.

3. All campaign materials including call scripts, email templates, and landing pages were created by Callbox and approved by the Client.

The campaign was able to generate 3.7 times more appointments than their internal sales development efforts

Email activities produced delivery rates of 98%, open rates of 33%, click-through rates of 11%, and reply rates of 7%.