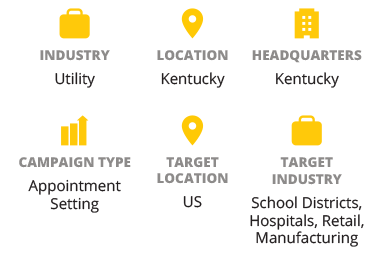 ABOUT
The Client is the LED Lighting division of a Kentucky-based vendor-sourcing company. As one of the largest fully-integrated LED companies in the U.S., the Client develops and executes end-to-end LED lighting solutions for businesses, deploying complete teams of lighting architects, engineers, project managers, and electricians.

The Client’s main line of service helps companies successfully implement and maintain LED lighting projects. Its key differentiator is that it provides fully-integrated, end-to-end LED lighting project management packages that come bundled with the needed expertise and support. The Client also offers 5-year unlimited warranties to its customers, which further sets it apart from other players in the industry.

• Launched a highly successful U.S.-wide appointment setting campaign for an integrated LED lighting company
• Resulted in 1 closed deal while the campaign was still ongoing
• Exceeded Client’s targets at every stage

As a previous Callbox customer, the Client already understands the value that Callbox’s multi-touch, multi-channel appointment setting solution delivers. In choosing Callbox for the second time, the Client expects the same level of commitment and service that brought success to the past campaign.

1. The Client provided a list of contacts for Callbox to profile.

3. The Callbox team leveraged online and phone-based techniques to validate and update each record.

1. Callbox prepared the call scripts based on the materials the Client sent over. The Client then reviewed and approved the versions specific to each target industry.

2. Prospects with current or upcoming LED lighting projects who agreed to meet with the Client for an initial assessment were tagged as qualified appointments.

3. Prospects interested in LED lighting but hadn’t yet agreed to meet with the Client were handed off as completed leads.

2. Positive call and email contacts were added as LinkedIn connections.

2. The call campaign prioritized contacts who opened or replied to emails.

3. The Callbox team created and tested the landing pages, banner ads, and email templates used in the campaign.

At time of preparing this case study, the 3-month campaign was wrapping up its final week. The campaign initially started with only one seat. But, by the end of the third week, the Client wanted to ramp up calling activities to 2 seats due to the inflow of promising prospects.

With Callbox appointment setting campaigns, it’s typical for appointments and leads to start trickling in after a few weeks or a full month of activities. That’s because the first two weeks or so are spent warming prospects up and optimizing the various parts of the campaign. This is shown in the below breakdown:

During the campaign’s second month, the Client was able to close one of the appointments handed off earlier in the project.

The Client expects to convert around half of the remaining 42 appointments (or 21 appointments) to customers within the first half of 2018. The Client is very pleased with the results so far that the Client has already paid for another 3-month campaign scheduled for next quarter.

Pick a date that works for you.

What time works for you?

You can suggest up to 2: